As I mentioned in my first blog post, I have four tonkinese cats (at the moment) so I thought I would introduce you to them.

They are all completely different so I decided they deserve a post each and who better to start with than the man of the house, Merlot (yes all four of them are named after alcohol!).

Merlot and his sister Ruby were born on the 26th July 2014 and were the best birthday present I could have wished for!

Merlot is known to rule the house, he is the loudest, most talkative cat in the world but also incredibly loving. What he says most definitely goes and if you dare to tell him off, you will know all about his feelings on the matter in seconds.

My days of privacy ended on the 31st October 2014 when we brought Merlot and Ruby home. He does not like me (or any of us) doing things without him, especially showering. God forbid, I nip into the bathroom for my morning shower without him – I then proceed to spend the whole time listening to him howl outside the door!

He’s definitely not impressed that I now have a full-time job and wakes me up every morning (10 minutes before my alarm clock goes off – cheers Merlot!) for a cuddle and he’s there to greet me every evening when I walk through the door.

Whilst he might be the noisiest, most opinionated tonk we have, he is without a doubt the most incredible, loving soul! He instinctively knows when I’m in pain, feeling low or just exhausted and is always on hand with kisses and cuddles to cheer me up.

So, there’s a brief introduction to Merlot (AKA, the man of the house). 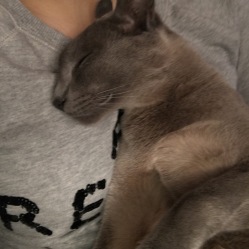 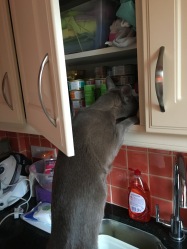 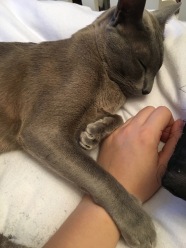 Hi, My name is Lauren. I was diagnosed with Ehlers Danlos Syndrome in 2013, and since then have become a pro at collecting lifelong, incurable conditions... View all posts by Chronically Lauren